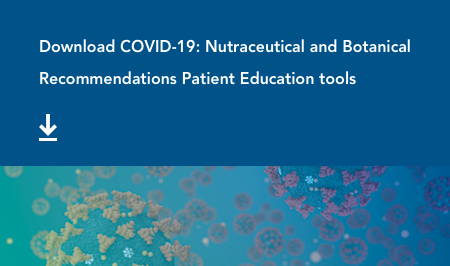 Licorice (Glycyrrhiza species) has multiple mechanisms of action, including inhibition of viral replication blocking the ACE2 receptor, promoting the activity of Th1 cells, and inhibition of pro-inflammatory cytokines, prostaglandins, and nitric oxide production. The inhibition of hydrocortisone metabolism by 11 beta-HSD has also been suggested as a potential mechanism of licorice’s anti-inflammatory action. Licorice has been use in traditional Chinese medicine (TCM) formulations against SARS-CoV-1 and H1N1 and reviewed for its effects on SARS-CoV-2. Two positive human trials have been performed against SARS-CoV-1 using a TCM formulation containing licorice.

The leaves of Andrographis paniculata have been used in traditional Eastern medicine systems for centuries for the treatment and prevention of upper respiratory tract infections (URTI), coughs, and sinusitis. Systematic reviews show a consistent and clinically relevant effect when used as a single herb or in combination with other herbal preparations. Andrographis has demonstrated anti-inflammatory, antiviral, and immune-stimulatory activities and has been shown, in vitro, to be effective against avian influenza A (H9N2 and H5N1) and human influenza A H1N1 viruses. It has been shown to inhibit platelet-activating factor–mediated inflammatory responses, to reduce the expression of cyclooxygenase-2, and to have analgesic as well as antipyretic effects. In addition, Andrographis is one of many agents that acts to decrease the activity of furin protease, a necessary step in SARS-CoV-2 spike protein activation and insertion into mucosal epithelial cells.

Astragalus membranaceus has been used in traditional Chinese medicine (TCM) for centuries. Astragalus is well-known for its antiviral activity, for its anti-inflammatory properties, for priming the innate immune system, and for reducing NLRP3-mediated inflammation. In addition, the plant alkaloid swainsonine inhibits the glycosylation necessary for the SARS-CoV-2 spike protein to attach to human cells.

Berberine is an alkaloid that is found in the roots, rhizomes, and stem bark of various plants, including goldenseal, goldthread, and Oregon grape. Berberine has been shown to have anti-viral activity across a broad range of viral targets. Berberine also activates 5′ AMP-activated protein kinase (AMPK),  which is directly anti-inflammatory. Berberine’s anti-inflammatory effects also include suppression of inhibition of IkB kinase and downregulation of NFkB, IL-1, and TNF. Berberine also acts to lower blood glucose, thus helping with furin inhibition, as well as preserving ACE2 receptors, possibly through aldose reductase inhibition.

Luteolin is a flavonoid found in medicinal plants and many fruit and vegetables, including peppers, celery, radicchio, chicory, and lemons. Plants rich in luteolin have been used in traditional Chinese medicine for the treatment of hypertension, inflammatory disorders, and cancer. Recent screening studies have identified luteolin as a candidate molecule to block SARS-CoV-2 entry into the cell as well as to modulate excessive inflammatory responses.