Emerging concepts are innovative ideas or interventions that are surfacing and hold potential for eventual adoption into clinical practice. IFM has a strong history of successfully identifying and accelerating the acceptance of emerging concepts. We are pleased to bring you this update to keep you in-the-know on exciting innovations in Functional Medicine. Learn more about this emerging concept as well as others at IFM’s 2020 Annual International Conference (AIC).

Climate change and other factors such as topsoil erosion, land management practices, and agricultural methods affect availability of food crops and potentially impact their associated nutrient levels.1-6 Recent research notes that atmospheric carbon dioxide (eCO2) levels may contribute to the fluctuation of nutrient availability in soil and nutrient uptake by crops, as well as the resulting levels of minerals and proteins in those plants that are ultimately consumed by people.2,5,7,8 The climate-related mechanisms for declines in plant mineral composition are not completely understood, and the argument is made that eCO2 potentially enhances overall crop yield, which may be a benefit in some situations, even if the mineral quality of the crop is decreased.2 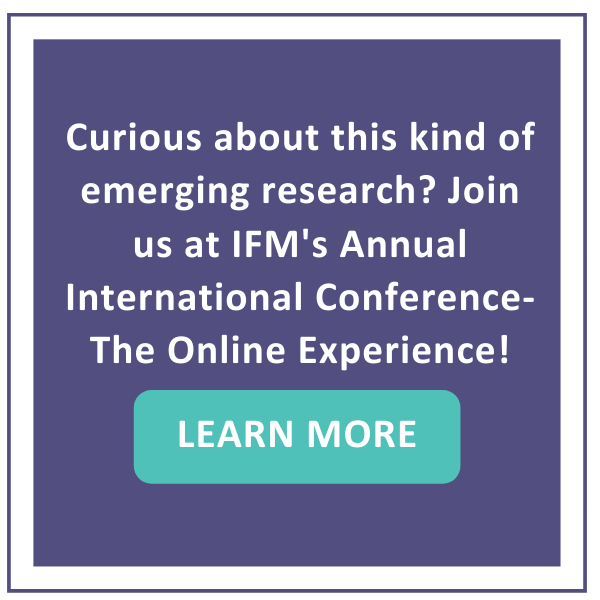 When considered through a nutritional lens, the human body requires certain levels of these micronutrients for normal body processes, and deficiencies in one or more micronutrients may lead to detrimental health issues and chronic disease. Already, several nutrient shortfalls have been noted within the US population, most people in the US do not consume the recommended amounts of fruits and vegetables per day, and analysis of National Health and Nutrition Examination Surveys (NHANES) suggests that an estimated 31% of Americans are at risk of developing micronutrient malnutrition.9-11 Several factors may contribute to mineral deficiency, including dietary patterns and the prevalence of a Western-style diet consisting of more processed foods and less vegetables. Additionally, declining nutrient density of food crops has the potential to exacerbate micronutrient malnutrition on a global scale, as well as in our own backyard.

A Focus on Soil

Soil is made up of organic material in addition to particles of minerals and rock, liquids, and gases. An important indicator of soil health is soil respiration, which is essentially a measure of carbon dioxide (CO2) released from the soil due to the decomposition of organic matter by microbes within the soil and the respiration of plant roots and fauna.12 This measurement indicates the level of soil microbial activity, the nutrients available in the soil for uptake by crops, and the soil’s ability to sustain plant growth.12 Essential soil respiration rates depend on factors such as the amount and quality of soil organic matter, temperature, salinity, pH, the circulation of air, and moisture.12

Maintaining a diverse soil biota is essential for agricultural sustainability for both productive and nutrient-dense crop yields.13

In 2016, a government report on US soils suggested that land-use changes in the past 50 years have contributed to reduced ecosystem functions.6 When combined with intensive agricultural practices and soil contamination, this has the potential to reduce soil microbial abundance and impair other functions such as decomposition and nutrient retention.6 In addition, a 2017 European Environment Agency report indicated that effects of climate change have been seen globally and in European soil, with moisture levels significantly decreased in some regions and increased in other regions since the 1950s.14 Climate factors can also affect the level and availability of nutrients such as nitrogen, phosphorus, potassium, and iron in the soil.2 One consideration is that warming air temperatures and increased solar radiation may lead to higher soil temperatures, resulting in more microbial activity, higher soil respiration rates, and potential limitations in soil nutrient availability.6

Affecting the Nutritional Value of Crops

The soil provides many nutrients that plants and humans require, creating a link between soil health and human health. As an example, soil can become acidic for a variety of reasons, including repeated harvesting of high-yielding crops, and the resulting magnesium deficiency negatively affects soil conditions, the sustainability of crop production,15 and potentially the amount of magnesium available when the crop is consumed. A 2020 meta-analysis of 99 field research articles that studied effects of magnesium fertilization on crop production suggested that the magnesium supplementation directly affected the levels of magnesium accumulated in the plant leaf tissues, with an increase of 34.3% on average.15 Continuing research suggests that crops grown on soils containing all the major nutrients for plants often have higher yields and higher nutrient concentrations; however, whether this is true for all types of crops and what soil factors and management techniques yield the most nutrient-dense crops is not well understood.1

Nutrient Deficiencies and Climate Change – From Crops to People

Research has suggested that the nutrient content of crops has declined over the years, possibly in part due to a number of factors such as the cultivated plant varieties, land and soil management practices, and climate change.2,8,16,17 A 2014 meta-analysis of 7,761 observations, including 2,264 observations at free air CO2 enrichment (FACE) centers and including 130 species, suggested that elevated CO2 levels reduced the overall concentration of 25 minerals in plants, including calcium, potassium, zinc, and iron, by 8% on average.8 In addition, this increased CO2 exposure increased the ratio of carbohydrates to minerals in the studied plants.8 A 2017 review found that elevated CO2 concentrations potentially resulted in a 3-11% decrease in zinc and iron in cereal grains and legumes, specifically.5 In addition to minerals, elevated eCO2 potentially impacts the protein concentration of various grains, which may significantly affect countries that rely on grain crops as sources of dietary protein.2,18,19

With increasing global warming concerns and continued micronutrient malnutrition worldwide, an emphasis on climate factors and how they impact nutrients in important food crops has surfaced in current research. Health organizations have reported on micronutrient malnutrition, including iodine, iron, folate, vitamin A, and zinc, that continues to have devastating consequences for billions of people across the globe.20-25 Micronutrient malnutrition has been associated with a wide range of physiological impairments, including metabolic disorders; reduced immune, endocrine, and cognitive function; and delayed or inadequate physical development.11,21,23 Magnesium, for example, is present in a variety of crop foods, from greens to whole grains. Yet this essential micronutrient is under-consumed in the US,9,26-28 with studies indicating that low intake may be associated with a greater risk for several chronic diseases.27,29

Increased levels of eCO2 potentially increase the yield of various crops through the enhancement of their photosynthetic rates.2,30 However, the impact on nutritional quality of those crops is an important consideration in the scope of micronutrient malnutrition concerns. A 2018 meta-analysis that used 57 articles consisting of 1,015 observations found that eCO2 increased the concentrations of sugars, antioxidant capacity, phenols, flavonoids, ascorbic acid, and calcium in the edible part of vegetables, but decreased the concentrations of protein, nitrate, magnesium, iron, and zinc at the following noted percentages:30

Elevated eCO2 is also a potential factor for decreased minerals and proteins in C3 grasses and legumes, which include cereal grains such as wheat, rice, barley, and oats.2,18,19,30 An often cited 2014 meta-analysis investigated 143 comparisons of six food crops grown at ambient and increased CO2 levels.19 The experiments had been conducted from seven different FACE experimental locations and tested the nutrient concentrations of the edible portions of rice, wheat, maize, soybeans, field peas, and sorghum.19 Meta-analysis results suggested the following:19

Longitudinal studies have suggested more positive outcomes for patients’ health and wellness when an organic diet is consumed compared to a conventional dietary pattern. For example, following an organic diet, including organic dairy, eggs, meats, and plants, may potentially increase intake of omega-3 fatty acids, reduce risk of allergic disease and obesity, and reduce exposures to food treated with antibiotics, to fungal toxins, and to toxic metals.31,32 Specifically for the consumption of organic versus conventionally grown food crops, study results may not be conclusive due to confounding variables such as overall lifestyle.31,32 According to a recent systematic review, few clinical trials have tested direct health improvements associated with organic food crop consumption, and have more often been indirect, assessing health outcomes based on differences in pesticide exposure.32

While lower pesticide residues among organic crops leads to the health benefit of lower toxicant exposure, differences in the actual composition of organic versus conventional crops may be limited.31 According to compiled systematic reviews and meta-analyses, results suggest that while the overall mineral and vitamin levels in plants may not be significantly impacted by the method of crop production,31 higher content levels of polyphenolic compounds in organic food crops have been shown.31,33 Many of these compounds have been associated with reducing the risk of a wide range of chronic diseases. A 2014 systematic review and meta-analysis of 343 peer-reviewed publications found that concentrations of antioxidants such as polyphenols were much higher in organic crops and organic crop–based foods.33 Specifically, the analysis found the following chemicals and estimated percentages:33

Learn more about the cumulative effects of toxicant exposures, such as pesticides, at IFM’s AIC 2020.

Research investigations have presented compelling results regarding fluctuating nutrient levels in food crops. Within the scope of micronutrient malnutrition in the United States and worldwide, these scientific results and conclusions are important to consider for the prevention of chronic diseases and the promotion of optimal health for the global population. Various shortcomings, variables, and gaps are evident in the research literature as the scientific and medical communities attempt to fully understand the relationship between the environment, agriculture, food consumption, and human health. One scientific article summarized contextual concerns and suggested that:34

The impact of elevated levels of CO2 on all essential micronutrients is not well represented in research, and recent reviews also suggest that the climate-related mechanisms for noted declines in plant mineral composition are not well understood, nor are the soil factors or management techniques that would yield the most nutrient-dense crops.1,2 Finally, weighing the potential benefits of eCO2 on crop yields against potential impact on nutritional composition of crops and translating those conclusions to direct human health consequences is an ongoing debate.

Understanding the evolving relationship between environmental factors, food crops, and human health enhances clinical awareness to ultimately move patients to better health and well-being. Nutrient density decline in some food crops, especially in the context of micronutrient malnutrition, is an important clinical consideration due to nutrient shortfalls that have already been seen within the US population and due to reports that most Americans do not consume the recommended amounts of fruits and vegetables.

Assessment of micronutrient deficiencies or risk of deficiency is essential during clinical intake to determine underlying causes of chronic symptoms or conditions, and addressing these deficiencies has the potential to improve or resolve many health issues. Evaluating potential toxicant exposure through food crops is another clinical consideration. Within the Functional Medicine Model, a comprehensive view of a patient’s historical and current conditions, including nutrition intake and dietary patterns, helps to determine appropriate interventions for each individual patient. Micronutrient malnutrition can be detrimental for a patient’s health, and those deficiencies may not be immediately obvious. Assessment tools such as the nutrition-oriented physical exam help detect imbalances by performing the physical exam through a nutritional lens. In addition, nutrition intake assessments and food diaries help determine amounts of nutrients consumed, help evaluate the variety of food choices, and may help inform treatment strategy.

Any decline of essential micronutrients in food crops is important to consider for the potential prevention of health issues, including chronic diseases, as well as for the promotion of optimal health for patients. Learn more about the latest advancements in Functional Medicine research and the resulting clinical applications at IFM’s 2020 Annual International Conference.